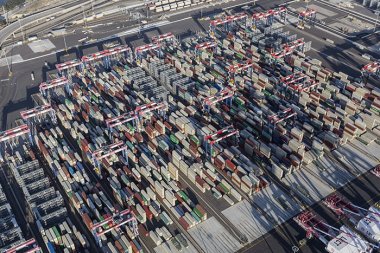 Ocean rates decreased slightly but most market participants saying this will turn around in Q2 due to strong demand, actions of ocean carriers to reduce capacities and the Ukraine war.

Worldwide demand for imports from China and other countries in Asia will remain strong.  Rail connections between China and Europe has been interrupted because of the Russia/Ukraine war.

Carriers will on top keep space tight by carrying out blank sailings and skipping departures.

China will remain a strict Corona policy and we see impact right now in Hong Kong and Shenzhen, more delays are expected.

Demand is very strong and capacity remains low, as a result carriers are overbooked. For Q2 an escalation of the current situation is expected, export customers need to plan 4-6 weeks and in some instances 6 to 8 weeks ahead to get on board.

The situation in ports and at rail terminals in the US remain chaotic, huge backlogs and delays to be expected. There remains a shortage of truckers and high fuel rates and this is expected to get worse in the next few months.

Ocean carriers and port/rail terminals will charge demurrage to shippers and consignees depending on the Incoterm since deliveries are massively delayed. Demurrage will not be waived as sometimes happened in the past. Ocean carriers and terminals will handle a strict non negotiable policy and charge full demurrage levels to parties involved. These charges can sometimes appear after months following the delivery since shortage of office labor force appears wide scaled.

There is a massive shortage on truck capacities in Europe and fuel surcharges reach never before seen levels of over 30% and more.

Capacities are still not back to pre-Covid levels and demand remains very high. Airfreight from Asia will be even more expensive because of the different routes to avoid Russia. Air carriers needs to carry more fuel and they can therefore carry less cargo. Many airlines from Asia to Europe have cancelled several flights due to the lack of routes available. Therefore, capacity ex Asia remains tight. Customers are asked to provide booking notices as soon as possible.